skip to main | skip to sidebar

The Somerset Fellowship of Drama held its annual awards nights for the Phoebe Rees Competition at Bridgwater Rugby Club in October. Seventeen people across West Somerset had been nominated in the competition, which is affectionataly known as the ‘Somerset Oscars’. The nominees and their friends turned up in their glad rags by car, bike and Rolls Royce, anxious to know if they had indeed won a prize.

In the end, five West Somerset people came away with awards: Jenny Warwick won the prize for Best Actress as Viola and Lis Halliday the prize for Best Supporting Actress in Roadwaters Players production of ‘Twelfth Night’. Adam Price was Best Male Actor under 21 and Alice Martin was Best Female Actor under 21 for their parts in Minehead Youth Theatre’s ‘Blood Brothers’, and Sarah Jane Cross won the prize for the Best Cameo Performance for her part as the maid in Barnstormers’ Fallen Angels.

Everyone came away feeling pleased with themselves and happy that the large number of nominations across the range of West Somerset companies reflected the fact that local drama is alive and well. THe community appreciate the efforts of all the local groups, while all the local companies are grateful that the public continue to turn up and help finance the shows which they love putting on.

The photograph shows Lis, Sarah-Jane, Adam and Jenny with their awards - Alice was unable to make the ceremony.

The Take Art: Live Village Performance Scheme is a well established scheme set up to bring professional, and semi-professional, arts events to rural communities across Somerset. The scheme relies on a partnership between local organisations and Take Art. By working together, memorable events can be organised in rural areas where people live and meet and so provide a way for peopel to come together socially.

Take Art exists to work with rural communities to promote arts events and provides an agency service to venues like the Regal undertaking to vet perfomance companies for quality. There are four events coming up that have been promoted by Take Art! Look out for the logo and be confident in attending a quality event.

Posted by Somerset Thrive at 7:36 AM 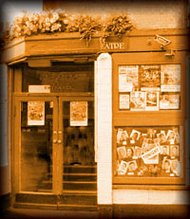